Anchoring the debate about cruise ships

Coincidentally preceding the crash of the large cruise ship MSC Opera against the dock at San Basilio on June 2, 2019 and the relative worldwide attention to the excesses of tourism, exemplified by the large ships that are threatening the existence of Venice, two new messages of the We are here Venice’s poster campaign are widely distributed all around the city.

The amount of greenhouse gas emissions generated by global tourism has increased 15 times in just 4 years, while in Greenland the glaciers melt at the rate of 3 Olympic swimming pools per second. Urgent measures are therefore needed to reduce emissions and avoid warming by 1.5 degrees and the consequent ecological disaster.

Moreover, according to the latest data published by Transport & Environment, 203 cruise ships in Europe pollute 20 times more than all cars; Venice is the third most affected city in Europe, and the first in Italy. Via our partnership with Cittadini per l’aria, we are part of the Clean Cruise Network, coordinated by NABU, that is pressing for tighter emission limits for shipping in the Mediterranean region.

For the establishment of the ECA area in the Mediterranean

WahV supports the need for the adoption of an emission control area in the Mediterranean through its poster campaign in Venice.

The pollution produced by ships continues to be one of the most serious threats to health and the ecosystem – air pollutants produced by ships, which largely use heavy fuel oil for propulsion, containing high amounts of sulphur, ash, heavy metals and toxic waste, spread even far from the ships that emit them and subjected to solar radiation they contribute to the formation of ozone.
Despite this, ships are not subject to the shore-based regulation of cleaner fuel or emission treatment.

One measure that could limit the pollution – already adopted since 2015 in the North Sea, in the Baltic Sea and in the English Channel and proven to be extremely effective (SECA: Sulphur Emission Control) – would be the imposition of an upper limit on ship emissions in the Mediterranean Sea as well.
The use of scrubbers to reduce sulphur emissions would not be effective, as they produce highly polluting residues and extend the use of heavy fuel oil.

A French study published in January 2019 on the evaluation of the health benefits of adopting an ECA area in the Mediterranean has demonstrated that 6000 lives could be saved every year thanks to the mutual endorsement of this choice by all countries on the Mediterranean Sea.

The decision of the IMO (International Maritime Organisation) to adopt a global sulphur limit of 0.5% for marine fuel from 2020 would not be a significant measure to reduce pollution from ships.

The coastal countries facing the Mediterranean should unanimously join the establishment of the IMO control area to reduce sulphur in marine fuels to 0.1%. 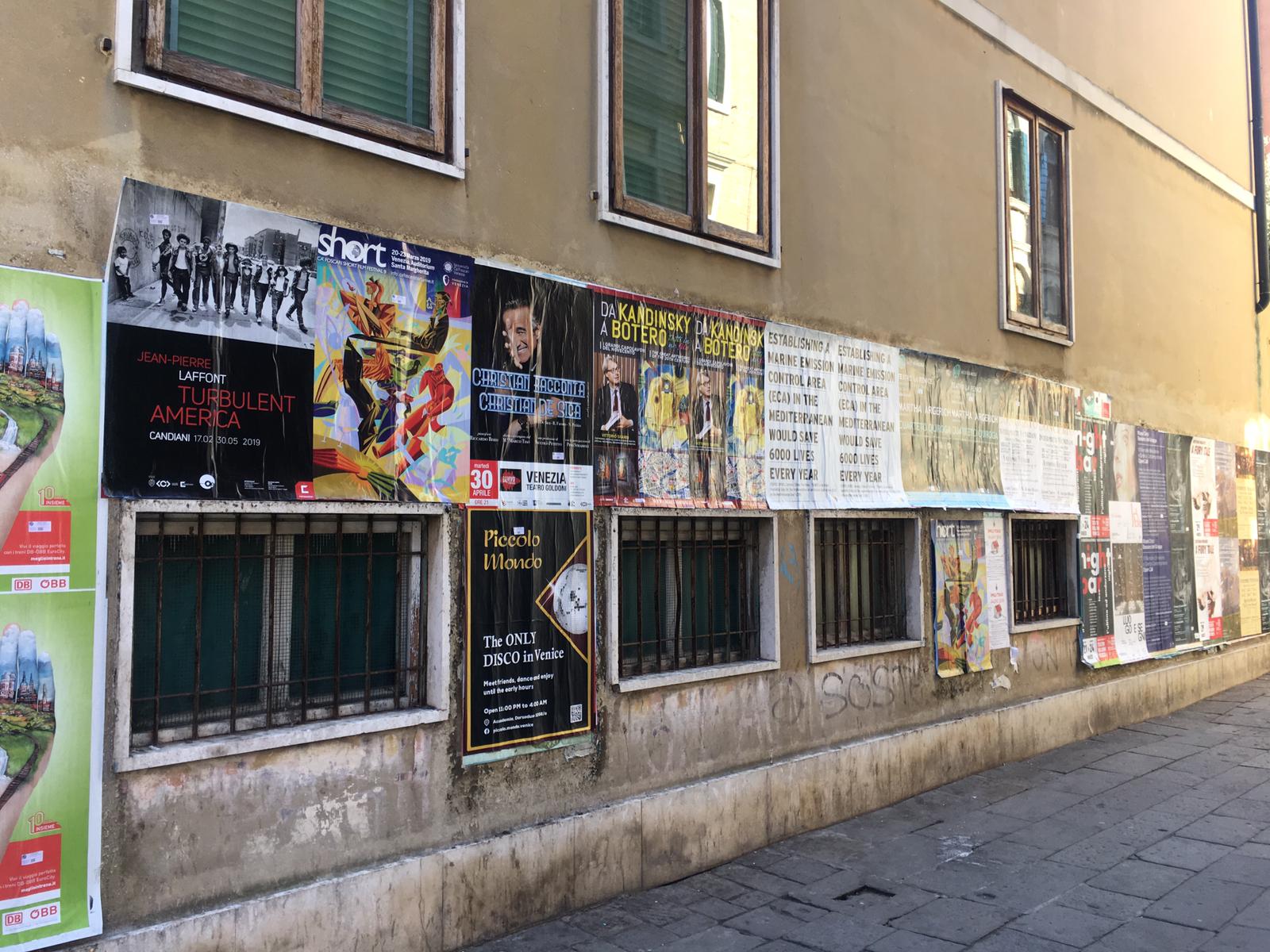 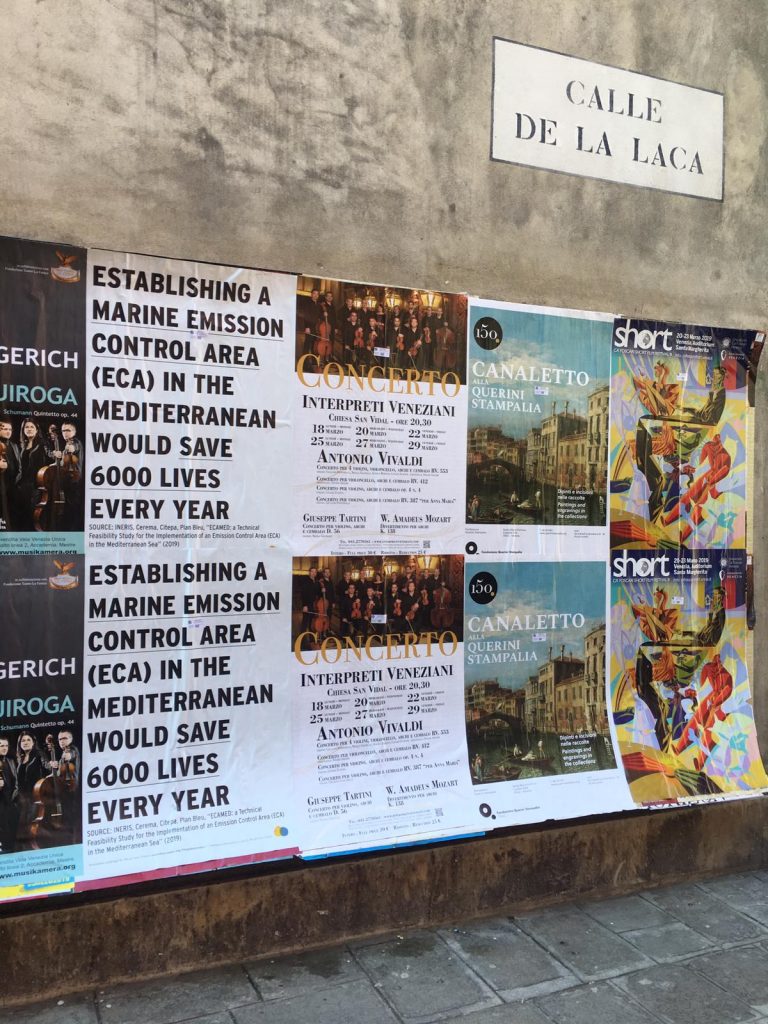 The decision to find a solution to Venice’s infamous cruise ship problem was taken by the Italian government in 2012 yet nothing significant has changed in all this time. To contrast the farce, WahV has committed to providing clear and objective information on critical issues in order to anchor the debate. The eighth poster has just been released since September 2017.
Themes have gone from the specific environmental consequences of cruise ships and associated proposals to more generalised themes like safeguarding the lagoon and air quality which also refer to everyday water traffic in Venice and the urgent need for tighter regulations and controls, in line with available solutions.

A further dimension of this campaign is the way it highlights WahV research, based on a variety of sources of reliable, objective information, that gets transmitted at street level to everyone: tourists, residents, workers, students, workers, and decision makers.

The posters are distributed within the regular bill-posting scheme of the city administration, alongside exhibition announcements, other cultural events and institutional communications.

The statements contain findings from scientific journals, official reports and reputable media sources. The intention is more than generic “awareness-raising”, the strong bold letters represent the magnification of the voice of Venice and also try to make it impossible for policy makers to act as if they do not know what they should know.

The latest poster in the campaign references the climate regulating potential of the saltmarsh. Surely, together with its role in protecting the historic city and other “ecosystem services”, this is of greater value than port activities in the lagoon – which are so damaging to the ecosystem? This is now one of our principal areas of work.

This initiative began when WahV became a partner, with Cittadini per l’Aria, of the project “Facciamo respirare il Mediterraneo” coordinated by NABU with support from the European Climate Foundation.

We hosted a workshop in September 2017. In 2018 a related stickers campaign was begun and continues via the Offsetting project. 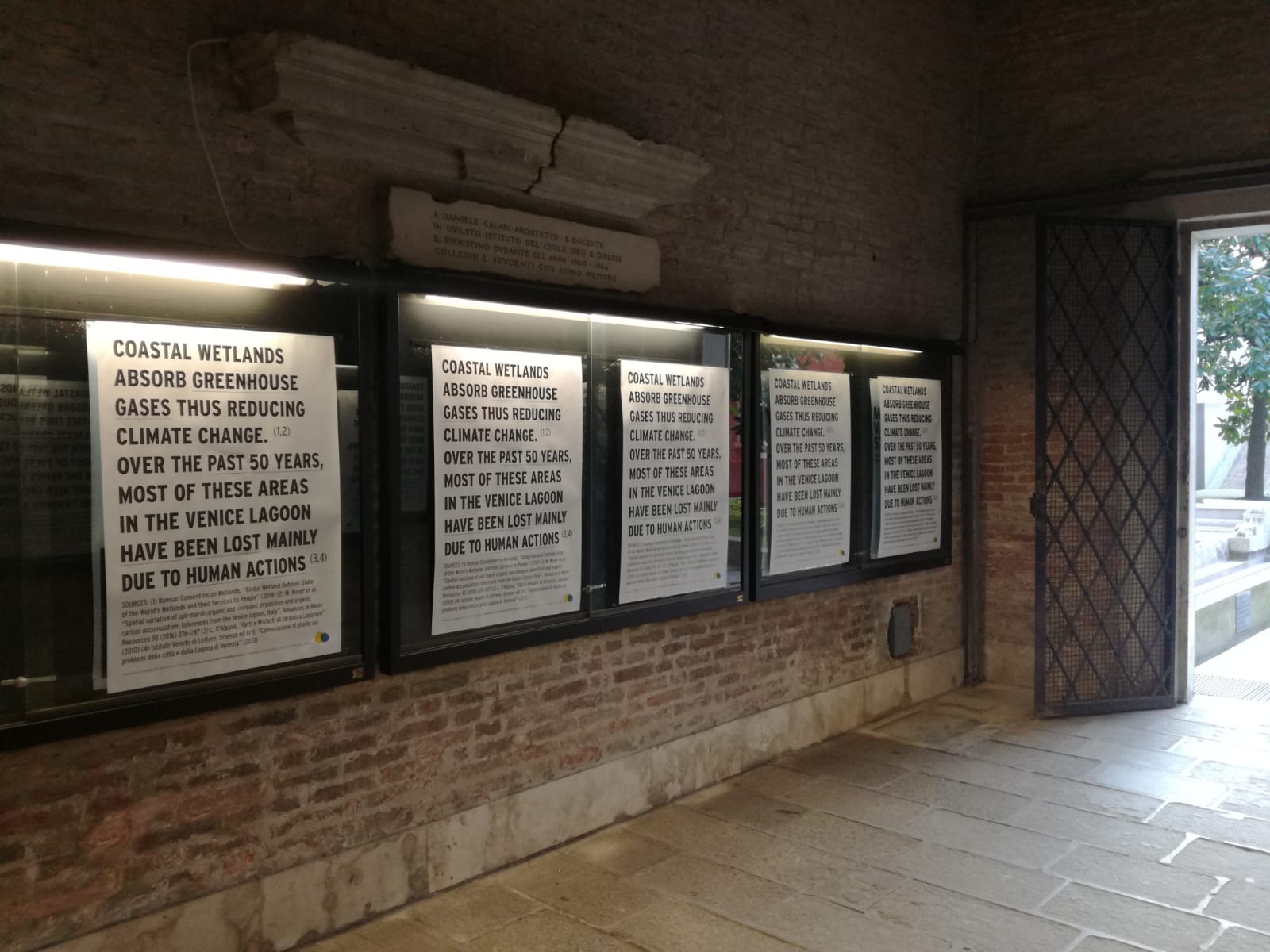 The November 2017 poster campaign, throughout Venice, crystalised a central concept that is fully endorsed by the PlosONE article: THE SURVIVAL OF VENICE IS DEPENDENT ON ITS LAGOON SYSTEM BUT THIS IS BEING SERIOUSLY ERODED BY SHIP TRAFFIC.
The aim is to:
help the public understand why the Marghera proposal does not represent a solution to the cruise ship problem;
remind policy makers of this fixed point in the debate about how to solve the cruise ship problem without sacrificing Venice and the lagoon;
underscore the importance of evidence-based decision making.

Results of a research project that began in 2014 with field measurements of the erosion caused by ship traffic in the Venice Lagoon was finally published in October 2017.

The inferences of the research are central to our indignation at the recent governmental decision (Comitatone on 7 November 2017) to:

–    allow an unlimited number of cruise ships below 55,000t to continue passing from the Lido inlet through Venice via the Bacino di San Marco;

–    build infrastructure at Marghera and carry out further dredging in the lagoon to facilitate the larger cruise ships in Venice via Malamocco and the industrial shipping channel;

Instead, WahV expects the government to support strategies, actions and plans to protect the Lagoon and the cultural, economic and social integrity of Venice, as set out in the Special Laws for Venice.

We referenced this work in our letter to the Director General of UNESCO (November 2017) urging her to use her powers of persuasion to press for an independent and qualified task force to objectively assess the question of cruise ships and Venice using an interdisciplinary approach. Only with the support of the best available scientific research and by taking account of the limits of what is possible from a physical, ecological, economic and social perspective as well as considering the parameters of the cruise sector, employment prospects of alternative scenarios and other stakeholder dimensions, will it be possible to end the uncertainty and release the city of Venice, its citizens and all the people in the world who love Venice and wish to save the city and its citizens from impending demise.

The posters have also been bounced off Facebook and Instagram, thereby reaching people beyond the tourists, commuters and residents who see them in the streets. The article has received thousands of “hits”, unprecedented for scientific articles of this nature.