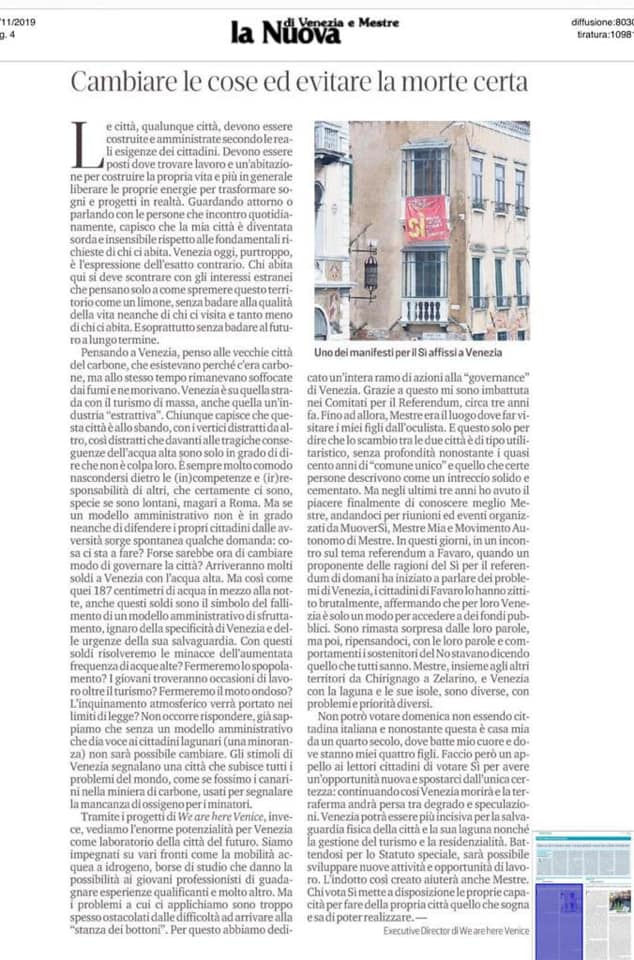 An open letter by WahV co-founder Jane da Mosto was published in local newspaper La Nuova Venezia ahead of the referendum on autonomy for Venice and nearby Mestre.

All cities, any city, must be built and administered according to the needs of its residents. They must be environments where inhabitants can find work, a home from which they can feel free to build their lives and transform dreams and projects into reality. Observing or talking to the people I meet every day in Venice, I realise that my city has become deaf and insensitive to the fundamental needs and demands of those who live here.

Unfortunately, the Venice of today provides the exact opposite of what its citizens need. Those who live here inevitably clash with those on the outside who think only of how to squeeze this territory like a lemon, for their own benefit, regardless of the disastrous impact on the quality of life not only of those who visit us, but more importantly, of those who live here. And — above all  — they are recklessly irresponsible about the long-term future of the city.

I think of Venice as analogous to the old coal-mining towns, which existed because there was coal, but at the same time the inhabitants were suffocated and killed by the toxic fumes and dust. Venice is on the same trajectory with mass tourism, which has become an “extractive” industry, throttling its survival.

It is evident to anyone who cares to see that this city is in disarray, with its leaders distracted by outside interests. So distracted, in fact, that even in the face of the tragic consequences of the recent floods they failed to respond effectively, and all they could say is that it’s not their fault. It is too easy to hide behind the incompetence and irresponsibility of others, which certainly exists, especially those sitting comfortably far away in Rome.

But if the current administration is not even able to defend its citizens from adversity, a few questions naturally arise: what possible response is there? Perhaps it is time to change the way the city is governed?

A lot of money will come to Venice because of the recent floods. But much like those 187cm of water in the middle of the night, this money is a symbol of the failure of an exploitative administration, insensitive to the unique needs of Venice and the urgent obligation to safeguard its future. Too many problems have persisted, unaddressed, for too many years.

Will this money solve anything as inevitable as the threat of increasingly frequent flooding? Will it halt depopulation? Will young people find job opportunities beyond tourism? Will it help address increasingly higher tides and the swelling numbers of tourists? Will air pollution be brought within legal limits? We know the answer: without an administration that can hear the voice of the lagoon’s citizens (a minority of the surrounding municipality’s population), real change is not possible.

Venice has provided rich gifts to humanity for centuries: it has inspired literature, art, music, and architecture of infinite value. But it is also a city like any other, that suffers all the problems of the modern world. It is getting the same kind of attention as a canary in a coal mine, sending a signal of oxygen insufficiency for the miners.

At We are here Venice, we see the enormous potential for Venice as a laboratory of the city of the future. We are engaged on various fronts: hydrogen powered water mobility; providing scholarships that give young professionals work experience while institutions benefit from additional human capital; programmes that integrate the temporary population and the social fabric of Venice in collaboration with the Biennale and local museums; revitalizing the salt marshes to mitigate the effects of climate change. Unfortunately, and repeatedly, the problems for which we try to apply concrete solutions are hampered by the difficulty of implementation. Our efforts are thwarted, time and again, by lack of support and even obstruction on the part of the local government.

For this reason, we have dedicated a significant portion of our activities to the “governance of Venice”, to study and articulate how to improve the quality of decisions and decision-making processes, not only in response to the emergencies and crises, but also to ensure a future strategy. Thanks to this, I came across the committees working for the Referendum about three years ago.

Until then, Mestre was simply the place to take my children to the ophthalmologist. And this is just to say that the exchange between the two cities is purely utilitarian type without depth, despite almost a hundred years of combined administrations, and what some people try to claim is a “solid and cemented” relationship.

I have now had the pleasure of getting to know Mestre better, going there for meetings and events organised by MuoverSI, Mestre MIA and the Autonomous Movement of Mestre. My new friends are wonderful people, passionate about their city, applying professionalism and competence to their cause.

But in my analysis, I have to be objective and also mention some facts that have surprised me. Recently, at a meeting on the Referendum in Favaro, when a proponent of the SI campaign started talking about the problems of Venice, the people of Favaro brutally silenced him, shouting that they’re not interested in hearing about Venice, confirming that for them it is just a way to access public funds.

No-one said what everyone knows: Mestre, together with the other suburbs from Chirignago to Zelarino, are all different — each with their own problems and priorities — from Venice, with its lagoon and its islands.

I will not be able to vote this Sunday because I am not an Italian citizen. Despite this, it is my home, where my heart beats and where my husband and four children live. I appeal to the readers to vote SI so we all have at least a chance of averting the only certainty: if we continue in this way Venice will die and the mainland will be lost between degradation and speculation.

I look forward to seeing the evolution of the two cities—Venice and Mestre–each with its own mayor and administration dedicated full-time to their specific needs and opportunities. Venice can focus better on the physical preservation of the city and its lagoon as well as managing tourism and looking after the needs of its residents. Striving for special status, it will be able to develop new productive activities and job opportunities. The increased economic activity thus created will also benefit Mestre, in addition to the new directions that city takes with full autonomy. Those who vote YES will be on the right side of history, and agree to commit their energy and capabilities to making their city what they know it can become.

Artribune 18.03.2019 The first art residency at the Gallerie dell’Accademia in Venice. The project by Claudio Beorchia

WahV supports the first art residency at the Gallerie dell'Accademia Read the article.

The Guardian 29.02.2020: ‘It’s the last nail in the coffin’: Venice Empties as Coronavirus Spreads

If this is a wake-up call, who is listening? The Guardian's Hannah Roberts got in…