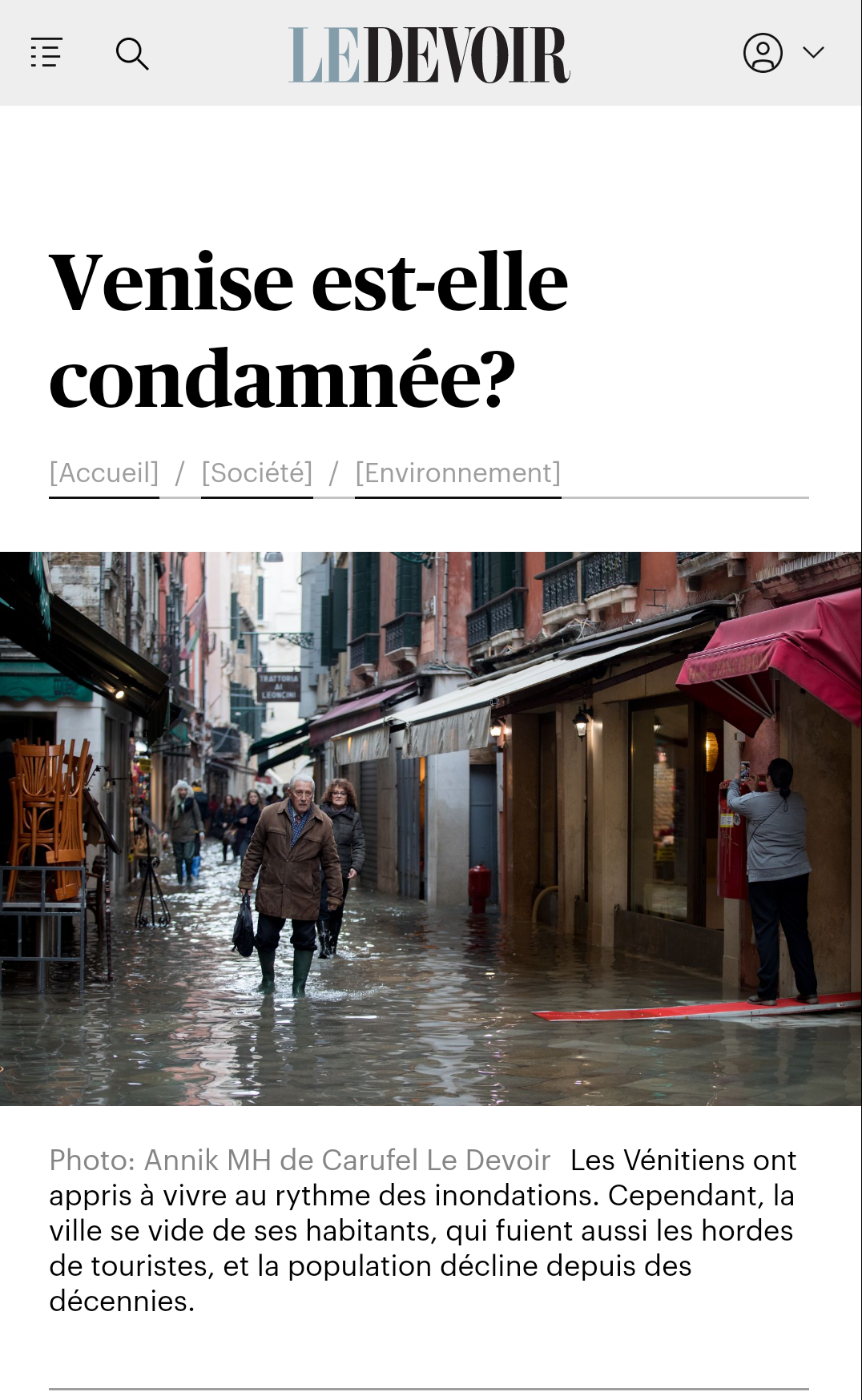 Canadian journal Le Devoir has featured our work in a special series on rising water levels, with the first issue focusing on the disastrous flooding in Venice.

The article, written in French, has been translated into English below.

“I’d love to offer you a coffee, but our machine has been broken since the acqua alta on the 12th of November. It was on the ground floor and it ended up under water, like many things here,” says Andrea Zanoni, who was elected to the Regional Council of Veneto as a member of the opposition.

The headquarters of the council, situated on the Grand Canal (the main thoroughfare of the city) is indeed at water level, with an unobstructed view of the magnificent Santa Maria della Salute basilica. But the offices for the local government of the Venetian region, which make an impressive sight for visitors, are also very vulnerable to high tides, such as those which caused major flooding in the Serenissima over the last few weeks.

On the evening of the 12th of November, when the historic flood affected more than 80% of Venice, the council had gathered in the ground-floor room as an alarm rang out to warn Venetians of an approaching high tide. Soon after, the meeting room was invaded by the waters, explains Zanoni. “We had heard the flood alarm, but we had no idea that the tide would be so strong. It’s the first time that the regional council, which has had its offices here in Venice for over fifty years, has been flooded. And the most ironic thing is that the council had just rejected our environmental budget propositions for renewable energy in the transport sector.”

Unfortunately, this situation is very “symbolic” of what is happening in Venice, adds the candidate for the Democratic Party. You could say that the city, built as it is on foundations supported by piles from the 16th century and onwards, is facing a “perfect storm” which is threatening to lead to its disappearance over the next few decades.

Built on fragile ground, Venice sinks a little more each year, largely due to underground waters being pumped out at great intensity for a period of decades by the industrial complex situated in nearby Marghera. At the same time, the city situated less than one metre above sea level has felt the impact of rising water levels; a problem which will get worse over the next decades, according to the predictions of scientists from the intergovernmental group of experts on climate change. “I don’t know if Venice will be able to survive this particular combination of things,” insists Andrea Zanoni.

In addition, the regional authorities have never done what is necessary to preserve the Venice lagoon, a huge buffer zone which historically has protected Venice against the impact of tides coming from the Adriatic sea. More than 80% of the saltmarsh and wetlands in the lagoon have disappeared, says Jane da Mosto, director of the organisation We are here Venice, which advocates for the protection of the region’s environment. “Yes, MOSE is essential for stopping water coming into the lagoon, but that’s not the only thing. We need to restore the salt marsh in the lagoon, which used to help reduce the water level in Venice. We have destroyed the city’s natural protection.”

The MOSE (an acronym for Modulo sperimentale elettromeccanico, or “experimental electromechanical unit”), is an enormous construction project comprising 78 dams installed in three entrances to the Venice lagoon. In the event of a tide over 1.1m, these dams would be raised in order to close off the entrances to the lagoon and protect the city. But the project, launched in 2003, is still unfinished, despite more than 9 million of investment.

“We have destroyed the city’s natural protection.”

Andrea Zanoni has absolutely no faith in MOSE, which politicians put forward as the solution to forceful flooding at the heart of the historic city. “The predictions of sea level rise clearly show that the city is going to disappear underwater, with or without MOSE. The water will simply go around it, under the island of Pellestrina, situated in the southern part of the lagoon,” he points out. Some Venetians also doubt the effectiveness of MOSE, a project marred by public funding embezzlement scandals.

Camilla Bertolini, a post-doctorate researcher at the University of Ca’ Foscari who specialises in the lagoon system, is also wondering what the long-term environmental consequences of the project will be. She points out that the lagoon, which is for the most part barely a few metres deep, was dredged to allow oil tankers to have access to the Port of Marghera. This has allowed salt water from the Adriatic sea to flood towards Venice.

Ms. Bertolini, Jane da Mosto and the architect Piero Vespignani are all of the opinion that, in the current circumstances, the best climate insurance policy for the city lies in “natural solutions”; including the regeneration of the lagoon’s ecosystem. “We can’t change the environment and the way natural forces work without paying the price for it, but we can change what we do,” continues Ms. da Mosto.

For now, however, politicians don’t seem to understand the importance of immediately putting in place measures to prepare Venice for the consequences of climate change. “Venice is absolutely not ready to face the impact of climate change. I am very worried about the years to come,” insists Andrea Zanoni.

“We need to restore the salt marsh in the lagoon, which used to help reduce the water level in Venice. We have destroyed the city’s natural protection.”

This worry was shared by many citizens that Le Devoir met in Venice. “Yes, I am worried about the city disappearing and all of us becoming climate refugees. If Venice disappears one day, where will we go to live? But there are lots of things we can do to avoid that, like the reduction of greenhouse gas emissions, the development of measures to adapt our infrastructures. We can’t just let Venice disappear under water. In any case this city is a striking example of what can be done to adapt and if we do nothing for this city, maybe that shows that we don’t even deserve to live on this planet,” explains Jane da Mosto, whose husband’s family have lived in La Serenissima for more than a thousand years.

She is calling for more global awareness at a time when the “climate emergency” is threatening entire populations in several regions of the world. “We also have to ask ourselves what we should save. Should the funds which could be used to save Venice be used to help refugees because of the impact of climate change? Is Venice really more important than the survival of refugees? It’s a question that’s impossible to answer. But we have to ask it of ourselves.”

Image by Anna Zemella. The cruise industry has featured frequently in headlines due to its…

Wahv contributed during the research phase of this feature by The Economist's Edward Lucas. Read…

An article by Eugenio Pendolini in the local newspaper on Laguna Viva, the new installation at…