Orientation for students from all over the world

WahV meets the students of the Design Department of the Sandberg Institute to share their point of view on the dynamics of the city and stimulate a dialogue with the group of students, engaged in the exploration of the city and in the search for proposals for a new community, permanence and resistance in Venice.

“Nothing to see here” starts with a field investigation about the multi-faceted Venetian situation, to grasp and analyze the traces of tourism that, as in the case of Amsterdam and many other cities around the world, has massively changed its identity. 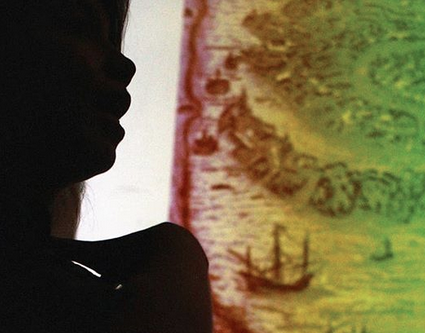 During the summer we get an especially large number of requests from visiting study groups and special workshops hosted by the universities in Venice.
Jane was a discussant in the final session of this VIU Symposium “Can Humanities Save the Planet?” and at LagunaViva space of the VAC Foundation we discussed that we do with archeology and art history students from Columbia University and the IUAV Visual Arts Summer Workshop with Urbonas.

Together with Riccardo Bottazzo of Eco Magazine and Global Project and Chiara Buratti of the Comitato No Grandi Navi, we gave four lessons in a row to all the students of the Morin high school in Chirignago (near Mestre). The main aim was to stimulate them to get properly informed about environmental and related issues in order to participate in all the choices and political decisions that will determine our future. It was also a chance to sample views of Venice from the surrounding territory. The student council invited us and have planned more sessions in 2019. WahV’s advice was to go beyond guest speakers and start a dialogue with the school maintenance and management to find ways of saving energy and resources starting here and now. 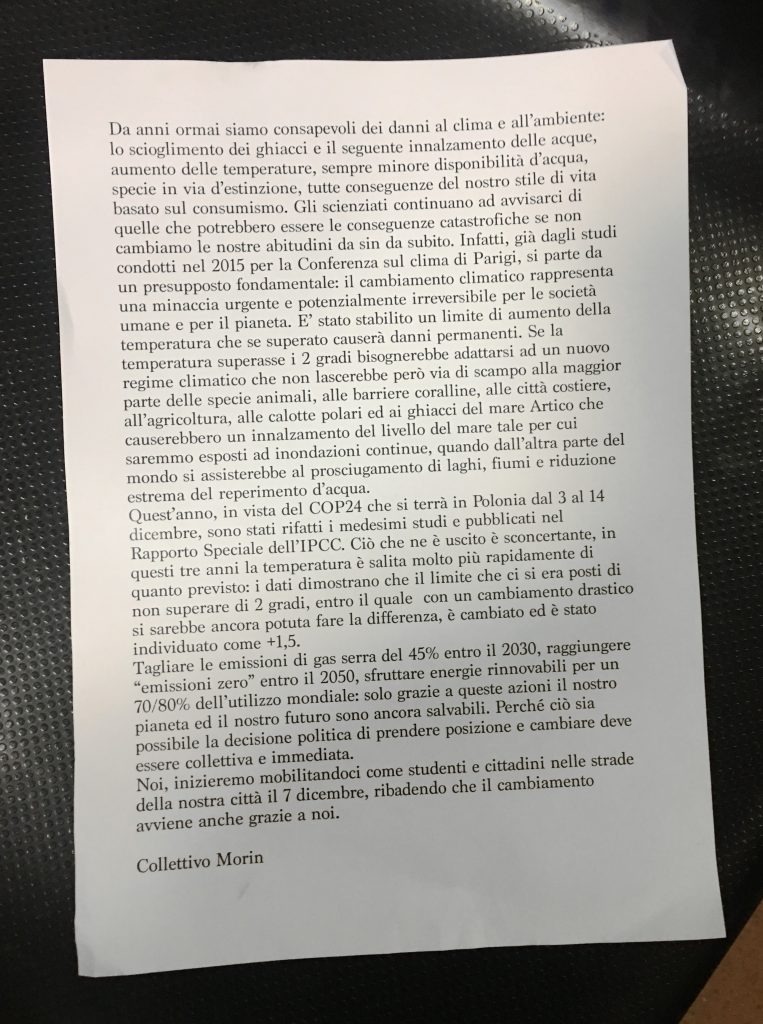 Discussing Venice’s ecosystem with students and professors from Colorado College

WahV met the students from Colorado College in the frame of their the course “Introduction to Global Climate Change”.

Among the fundamentals of the Earth system, the natural forces that drive Earth’s climate,  the paleoclimate records, the students had the chance to look more closely at the impacts of climate change as well as policy responses for adaptation and mitigation in Venice.

Mapping the City with the University of Buffalo

We are here Venice was very pleased to be invited by the University of Buffalo to participate in their “Mapping the City” workshop during their two-week study abroad programme in August.

As they walked from Garage San Marco to Laguna Viva, the group discussed air quality issues, citizen science and monitoring the environment.

Read more about their findings here.

Explorations in Venice with the Krogerup College students, Humlebaek, Denmark

WahV regularly meets groups of students from the Krogerup College, Humlebaek, Denmark. Together we explore different districts of Venice, trying to perceive and analyse its characteristics and its differences in relation to other areas in Venice. Besides we discuss about more general topics on housing in Venice, on economic and touristic dynamics which are changing the life of the city, focusing on the sociological and urban aspects, main research subject of the students.

As part of We are here Venice’s collaboration with the Antigua & Barbuda National Pavilion at the XVI Architecture Biennale, WahV is helping to curate the public and educational programmes. Antigua and Barbuda’s inaugural National Pavilion explores the theme of Environmental Justice as a Civil Right.

A series of video conferences involving students from Venice, New York, Antigua and Barbuda were held to open the Student Programme. Coordinating these sessions proved no mean feat (due to the different time zones!) but they led to really engaging discussions between the students.

The first discussion on Monday 9th April took as its point of departure the students’ personal experiences of living on an island and to what extent this impacts their everyday lives. The conversations moved on to comparisons of and reflections on personal experiences of climate change. Participants were then asked to consider what environmental justice means, and what politicians should be doing in this regard. There was unanimous recognition that the impact of climate change had been felt close to home in all cases. Specific examples included Venice’s evermore frequent, severe and out of season acqua alta, New York’s storm surges and, most recently and devastatingly, Hurricane Irma for Antigua & Barbuda.

Antiguan students raised important points about culpability, referring to the United States’ greenhouse gas emissions against their own island’s negligible contribution. They also highlighted differing efforts on the part of state governments to tackle climate change, citing examples such as Antigua’s ban on Styrofoam and plastic bags. Students from the New School in New York referred to their Governor’s efforts to introduce a ban on Styrofoam, though these efforts were challenged and later successfully countered by the Dunkin’ Donuts chain.

Students concluded that often issues become politicised and career politicians fail to address climate change as they focus on winning votes in the short term. Thus politicians need to be held to account and called upon to act. All students agreed that a change of mentality as well as behaviour is needed, especially considering that the consequences of climate change are not evenly distributed and therefore all citizens across the globe need protection from environmental hazards and need to institute strong environmental laws.

Finally, students exchanged ideas about the changes that can be made at an individual level, such as reducing energy consumption, recycling, using public transport, using reusable items, eating seasonal and local food, encouraging transitions to vegetarianism, educating oneself and others, participating in grassroots campaigns, raising awareness and being proactive in these efforts across the board.

Excerpts from the discussions are being made into a video for the National Pavilion with more details to come.

The next event on the programme is on Monday 28th May: Antigua & Barbuda are taking the Meetings in Architecture session at 2:30pm at the Teatro Piccolo. Two students from Venice’s Liceo Europeo Classico Marco Foscarini will be presenting to reflect on the video conferences.

“Critical Issues and Ways of Thinking About Them”

WahV participates in the annual course for school leavers, with two sessions including an interactive element, in contrast to the rest of the lecture-based programme. Between the initial briefing and final presentations, students had a month to compile short smartphone-based photographic reports on any or all of the following themes:

WahV and Melbourne University, a talk to visiting students by Jane da Mosto

On Thursday 14th December, WahV went to Palazzo Polignac where Jane da Mosto gave a presentation to the students from Melbourne University, Australia, about WahV, Venice and its lagoon, and the challenges we face today. The students responded with a range of interesting questions and observations, having been studying in Venice for a month. It was a pleasure for WahV to meet such engaged students on their final evening in Venice. With thanks to Catherine Kovesi for the introduction. 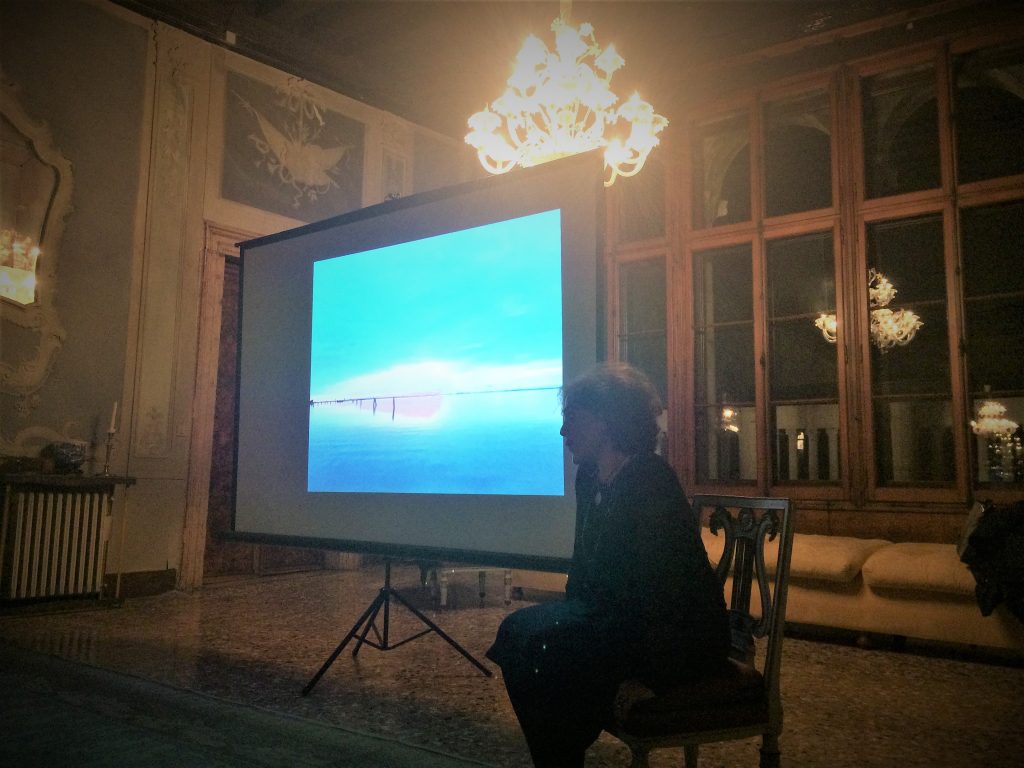 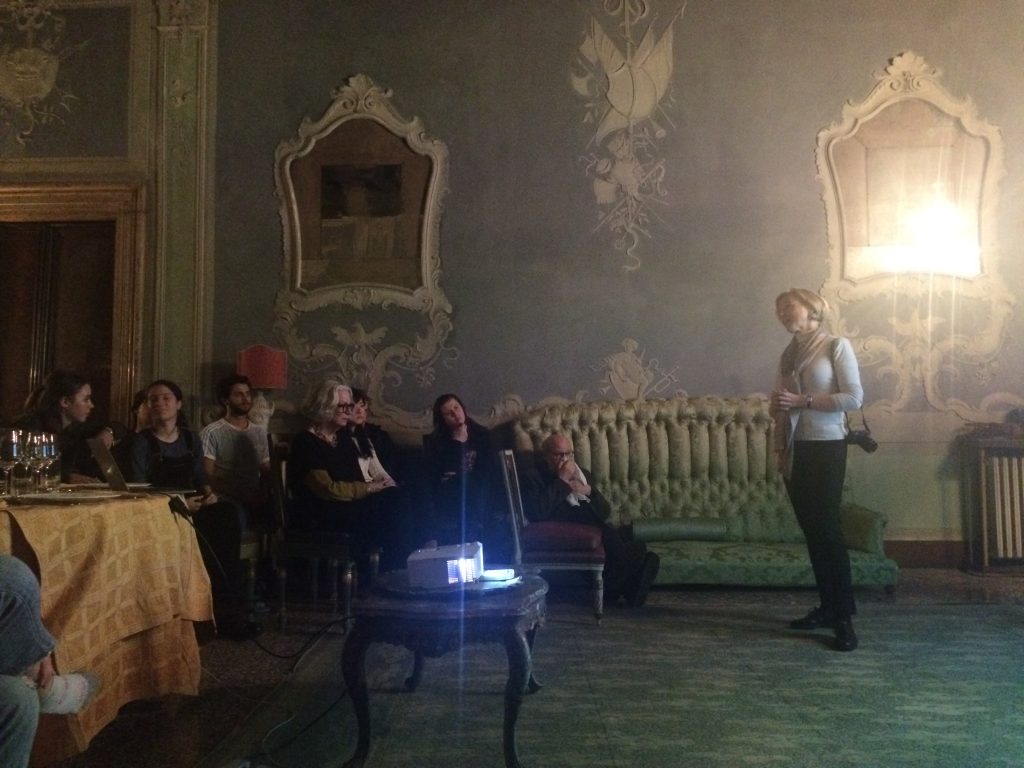 WahV met a group of students from California Polytechnic State University with professor and architect Tom Rankin and organised by AIA. We did a “walking lesson” through the Castello area including open discussion around the most urgent issues affecting the city’s future, reflecting on its culture, ecosystem and economy.

On Monday 23rd October 2017, WahV met with a group of architecture masters students from TU Delft led by Sereh Mandias and Sam De Vocht. We took them on a walk around Venice to talk about the city’s social and environmental context, in which they will develop their masters projects. The talk took as its starting point the rising tension between the pressures of mass tourism and Venice as a lived-in city, going on to look at the Venetian campo as a locus of civic life, addressing the rising water levels and what these mean for the city, as well as the decline of inhabitants in the city.

WahV hosted a fieldwork expedition to the Lagoon to understand the implications of climate change for Venice. The output have been used not only by the Eton students but also promoted and shared with other schools in the UK and beyond, via the RGS.

We introduced the Architectural Association unit 7 students and Samantha Hardingham to the challenges and opportunities of the Arsenale, specifically the northern area.

The interests of the unit were grounded in an appreciation and a delight in the proximities between heavy engineering and ultra-lightweight and information technologies – and what their architectural consequences might be. Parallels were considered between Wallasea Island in Essex (much of which has been reconstructed as a flood barrier and nature reserve with the spoil from the Crossrail tunnel) and Venice, in terms of the barrier project and the underlying political, environmental and social systems that operate in the city. The students were “overwhelmed by the range and complexity of the situation”.

The lecture was part of an English Culture course focused on contemporary cultural debates about global warming and climate change, run by Professor Shaul Bassi, Director of the International Center for the Humanities and Social Change.