The Saltmarsh Tank at the British Pavilion

The Saltmarsh Tank at the British Pavilion
[vc_row][vc_column][vc_column_text]Jane da Mosto, Lorenzo Bonometto The ‘Saltmarsh Tank’ presents a paradigm of the problems of fragmentation and of the loss of functionality: extrapolated from its context and rebuilt on a small scale, it can exist only in the presence of certain conditions, carefully planned and continually managed. 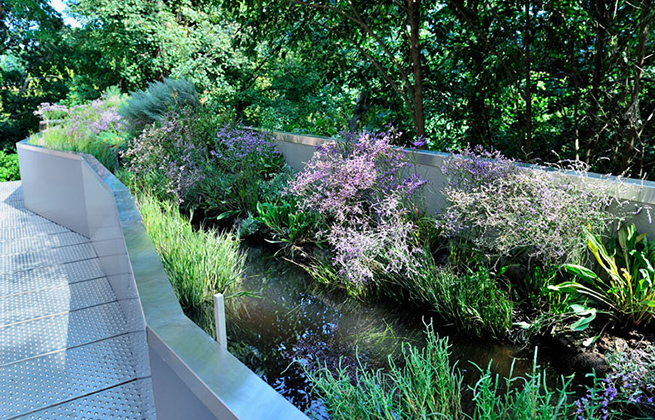 Returning to the cardiovascular analogy of the previous section, it is as though a single capillary (creek) and alveolus (tidal pool) were extracted from a lung; obviously their continued operation can only be stimulated artificially.

Sackfuls of sand and bark were used to mimic the differentiations in ground-level within the tight depth and breadth of the tank, then lined with jute sacking on top of which the clods of vegetation were held in place with wire. The lack of a true ecosystem made it necessary for significant quantities of external energy to be used, for water circulation and periodic changes in water level (tide simulation), as well as by the filter system and oxygenators substituting for the natural purification processes that would occur in the lagoon. A saltmarsh or an aquarium? Is it enough to have water, mud, Sarcocornia and Limonium to define the environment of a saltmarsh? Obviously not. To compensate for the lack of natural functionality, the tank is fitted with various artificial elements. The switches used to regulate the pump, filter and oxygenators are an example of the continuous maintenance needed. The problem is now transferred to the real world, to a crucial issue for many Venetians today. Is it appropriate to create an artificial saltmarsh? When is it necessary to resort to such laborious physical protective measures? Which ones will work best? There are many levels of artificiality. We should try to avoid the artificial when instead there remains the possibility of harnessing and orienting processes that reverse the trend towards environmental degradation. Where possible, materials and modes of intervention should be favoured that can be incorporated into the natural dynamics of the system, reinvigorating the natural defences of the saltmarsh. The positioning must also be relevant to the natural or historic features of the lagoon, and ground levels and morphological differentiation should respect the system so that the full functionality and identity of the saltmarsh can be achieved. Artificial interventions characterised by heavy infrastructure should only be applied where permanent changes in the surroundings have caused the near total degeneration or disappearance of an intertidal habitat, where the destructive energies cannot be limited or dissipated: namely, in situations in which there are no viable alternatives if the surviving saltmarshes are to be protected or extended. In these cases the artificially protected areas should be considered an inevitable foundation for the protection, survival or regeneration of the saltmarshes. 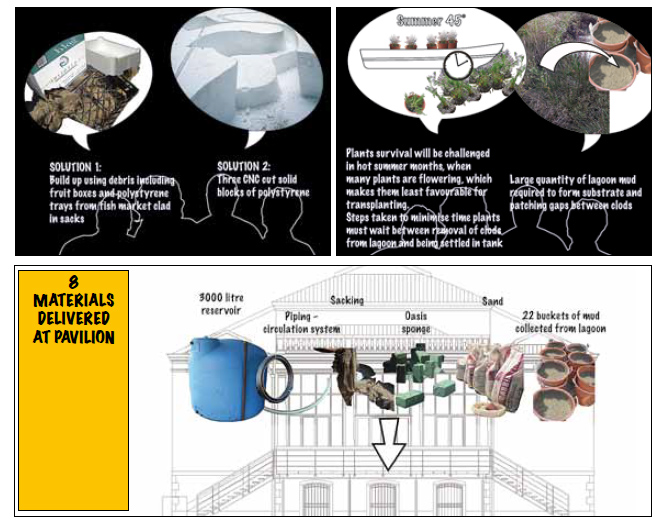