All human works, when not linked to the identity of their location and place, risk producing monsters. If this is the principal meaning of Villa Frankenstein, a supplementary message, also explicit in Ruskin’s notes, should guide this experience: the attention to details, to ‘close looking’, is fundamental – even ‘strategic’ – for the conception and understanding of a place. 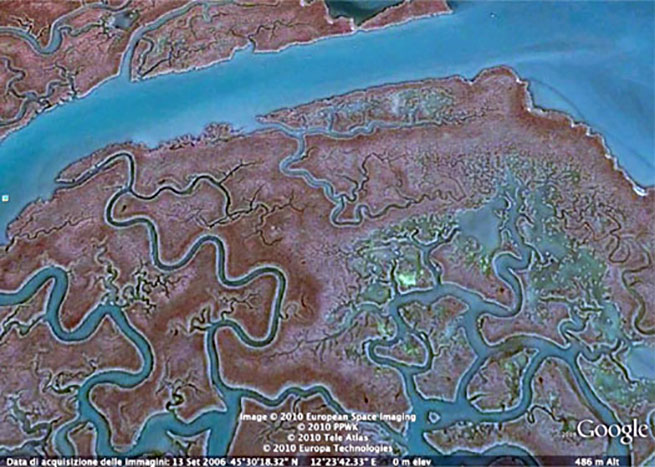 Thus here we are in the serpentine Venetian Lagoon, winding between the magnificence of the past, old monsters and new; but the spirit of the place persists, even if profoundly subdued under the spell of sleep. It continues to offer extraordinary sights, rich with simultaneously real and symbolic meaning. The barena with its succulent plants, the birds that populate it, the past and present Lagoon forming the exhibition at the British Pavilion – from near and far they all speak to us of this. The barene (saltmarshes) are flat tabular areas regularly submerged during high tide and covered by distinctive vegetation that can thrive in the salt water. In the Venetian Lagoon these are considered the most characteristic elements of nature and landscape; but they can also be read as a metaphor of the city. For like Venice they developed on that thin borderline between the emerged world and the submerged one, between sky, land and sea, with the rarity and functionality of such amphibian, water-breathing locations. And like Venice they cannot be understood, maintained and protected if one limits oneself to their image as an aesthetic vision, without considering their relation to water and tide which is the very foundation of their existence. It is a metaphor which operates on more than one scale. Taking off from Marco Polo Airport, for example, we all remain fascinated by the lagoon beneath us, its barene and canals together drawing arabesques of astonishing harmony. But we also find these same designs in Venice itself, in the Grand Canal, which demonstrates the ancient nature of these river branches. Their meandering forms, in the shape of the city itself, bear witness to those islands on which the city is born. Gliding in a boat in the more intimate areas of the Lagoon, the barene offer themselves to us from afar, like lines on the horizon, marking once again the boundaries of water and sky, just as the Venetian skyline appears to those who enter the basin of San Marco. Alighting on the marsh and touching a plant, it is easy to perceive the extreme adaptation expressed by these living forms, just as Venetian culture has expressed solutions and visions of life born of its own close relationship with the water and the tide. The ‘Saltmarsh in a Tank’ on the terrace of the British Pavilion, besides inviting us to some ‘close looking’, also proposes itself as one more metaphor, a bitter prophecy of the future of the Lagoon and the city. Re-creating a marsh a few metres above the actual Lagoon is like creating one a thousand kilometres away, or indeed on a spaceship. The stainless steel borders that contain this barena emphasise that displacement. Extrapolated from the borderline between sea and sky, this model line can become vital only if it is re-staged artificially, complete with tidal ebb and flow; and only if this realisation accurately corresponds to the system’s natural dynamism, and the typical species and their requirements, including the passing of the seasons evidenced by the flowering of plants and dying off of certain species in winter. But the reality is something else. In Las Vegas there exists a second Venice, with as many gondolas as on the Grand Canal, but on the second storey of a large hotel complex, rebuilt according to stereotypes, like a toy country for a civilisation in decadent decline. Sometimes Villa Frankenstein surpasses itself. We hope that Venice finds other, more genuine, outposts with ties to its history and culture, to its bond with the Lagoon itself, and to the latter’s ‘respiratory system’. For the barene truly are the lungs of the Lagoon, in their vast extent and their elasticity – though they certainly cannot fit or function thus in a tank … Today, the acceleration of sea level rise conjures up disquieting scenarios for Venice as for all coastal cities (and not for these alone). And there is a deep fear that those much-vaunted development works at the sea inlets (which we can only hope succeed) will provide a solution for only a few decades at most. Thus the ‘Saltmarsh in a Tank’ anticipates a scenario – one that nobody wants but which we must consider in our investigation of diverse solutions – the scenario of ‘Venice in a Tank’.[/vc_column_text][/vc_column][/vc_row]