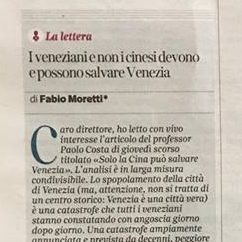 Fabio Moretti responds to Paolo Costa’s editorial piece in the Corriere del Veneto ‘Only China can save Venice’ (11/01/2018) with a letter published in the paper on 17th January 2018: ‘The Venetians, not the Chinese, can and must save Venice’

Translated transcript of the letter:

Dear Director,
I read last Thursday’s article by Professor Costa titled “Only China can save Venice” with much interest.
The analysis is, for the most part, shared. Depopulation in the city of Venice (note that we are not talking merely of an historic centre: Venice is a real city) is a catastrophe that all Venetians experience with anguish every day. It is a catastrophe widely disclosed and forecast for years, worse than the flood of 1966 due to its irreversibility and protraction over time.
However, what is not clear in reading the article is why the “Chinese” should be those able to prevent such a catastrophe. I have been visiting that part of the world for business since 1984 and I am certainly not sensitive to the rhetoric of the “yellow danger”, but I simply do not understand. It seems comparable to suggesting putting a leg in a cast… to cure pneumonia.
Living in Venice it is a great relief to note the spontaneous emergence of numerous movements and associations of Venetians, driven by the will and desire to redeem the city and promote permanent residency in opposition to the tourism monoculture that constitutes one of the principal causes of depopulation. These initiatives – that must be encouraged and supported by the municipality – show that all is not yet lost, the lifeblood of Venice is not extinct.
The lagoon city, that which the rest of the world thinks makes up the whole municipality, should give itself, and not the Chinese, its own administration. An administration that has, as an absolute priority, the study and realisation of a robust and achievable project of repopulation and regulation of the tourism phenomenon in the medium and long term. This project should be the result of work with the best expertise available at the international level, naturally involving the townspeople.
The participation and mindset of new, young people, free from conflicts of interest, is also necessary. It does not seem to me that those who have administered the city in the past, nor those in the current administration, have really confronted, or wanted to confront, or even to resolve, the catastrophe of depopulation.
Thank you for your attention.
Avv. Fabio Moretti.

‘Only China can save Venice’

Paolo Costa identifies the unrelenting trend of depopulation in the city of Venice, and the gross imbalance between the city’s hosting and welcoming capacity, and the global demand ‘to see Venice’ that is without bounds.
Costa references Airbnb as one of the key factors that has allowed much of Venice to turn into temporary accommodation, contributing to Venice’s economic dependency on tourism. Whereas other popular historic cities such as Rome and Florence have alternative industries and sectors, tourism is at the crux of the city’s economy.
Costa draws on the potential of European-Chinese relations, suggesting a project of a global nature whereby Venice plays the integral role as the western terminal connecting Europe with China and the East.

The articles in Italian as they appeared:

Korean Pavilion at the Venice Biennale

Life in the Lagoon – a General Outline Amidst the splendour and magic, it is…