As conclusion of the artist’s residency, the presentation of Aurale, Brusii per audioguide

After three months of his artist residency, Claudio Beorchia presented his works at the Gallerie dell’Accademia on Friday, April 12, and they will be available to the public until Sunday, May 12.

For three months since January 14 2019, the artist had the chance to create something for the permanent collection of the Accademia: Aurale is about the relationship between visitors and the Museum, investigating the connection that is inevitably created between the audience and the artistic heritage in each of the rooms of Gallerie dell’Accademia and its masterpieces.

For the occasion, the artist together with the curator Michele Tavola, a room guard and a staff member of the museum gave original performative guided tours following a path that narrates his special experience at the Museum and offering the public some excerpts from the script he assembled during the residency. The performance will happen again on the closing day, May 12, and to reserve a place send an email to infogallerie.venezia@beniculturali.it.

Read the article from Artribune.

Read the article from the Financial Times.

On January 14th, 2019, the artist’s residency project organized by the Gallerie dell’Accademia di Venezia in collaboration with the Accademia di Belle Arti di Venezia, the association We are here Venice and with the fundamental support of the London Stock Exchange Group Foundation and other generous donors began.
Claudio Beorchia, the winner of the call, which was attended by dozens of artists from all over Europe, will focus on the relationship between visitors and the museum’s environment. You can meet him in the rooms of the Galleries, dressed as a guardian and whoever recognizes him can question him on the deep meaning of his research.
The work that will be created during the three months of residence will be exhibited at the Accademia Galleries from 12th April to 12th May 2019.
From January 14th it will also begin the series of meetings, workshops and guided tours, all free entrance with reservation required.

Here a detailed programme of the artist’s residency and collateral events. 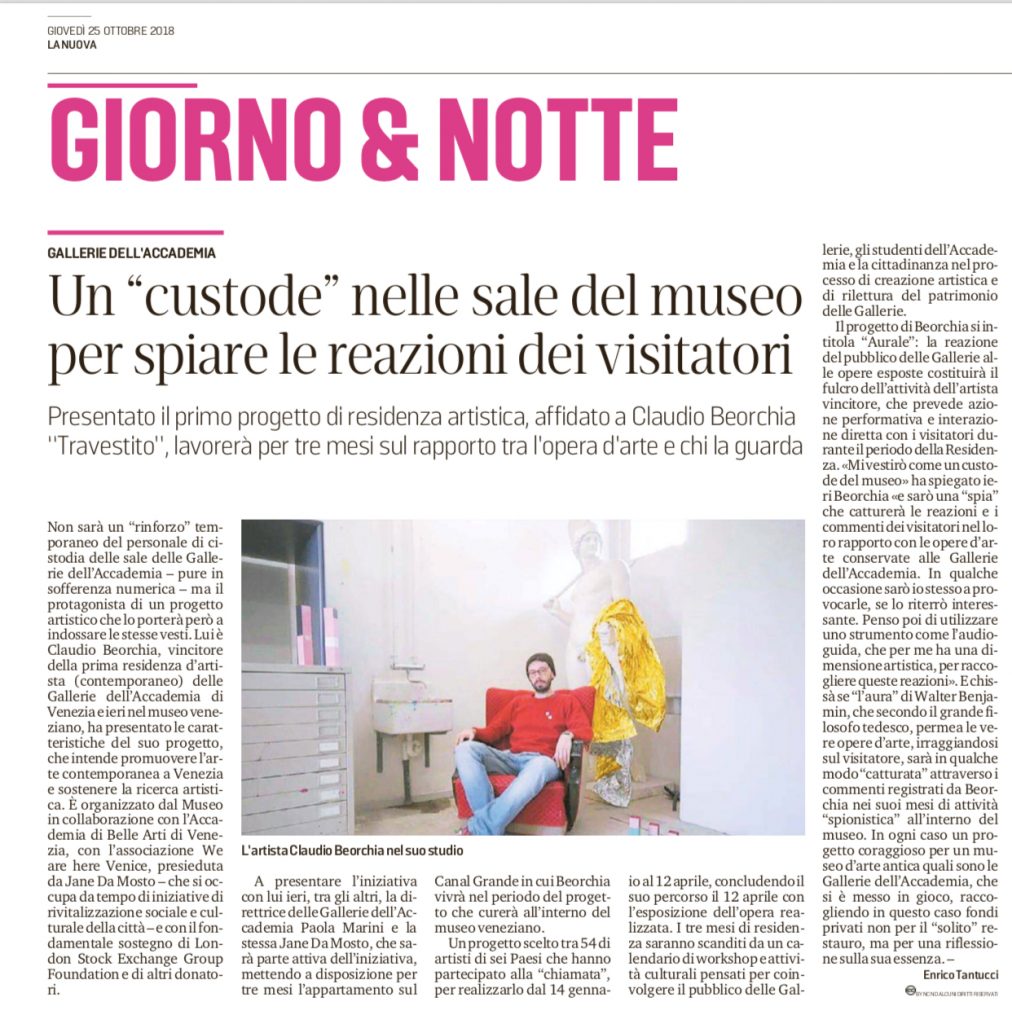 The Accademia Galleries have announced the winner of the first artist residency.

View the announcement on the Accademia website or download the press release in Italian here, translated as follows:

The initiative, which aims to promote contemporary art in Venice and support the work of young artists, is organised by the Gallerie dell’Accademia in collaboration with the Accademia di Belle Arti di Venezia, the association We are here Venice, helmed by Jane Da Mosto, and the fundamental support of the London Stock Exchange Group Foundation and other donors.

The winning project, chosen among 54 entries received from six different European countries (Italy, France, Germany, Spain, Sweden and Switzerland), is titled “Aurale” and was submitted by  Claudio Beorchia, class of 1979. The public’s response to the works exhibited at the Gallerie dell’Accademia will constitute the focus of the young artist, who will include elements of performance and direct visitor interaction during the Residency. The proposal was particularly well-received for its originality and intent to highlight the daily life of the museum, understood as a dynamic, living organism, as well as its unprecedented focus on the integral – but often barely considered – role of the reception and supervisory staff. Furthermore, Beorchia’s work, by virtue of its relational qualities, is able to communicate with a wider audience than that already interested in contemporary art.

Details of the residency project will be announced in a specially dedicated press conference.

The jury debated the submissions at length, appreciating the commitment that the candidates demonstrated and the high quality of the projects. The projects were developed broadly along two lines: if about half the proposals focused on a comparison between a single work and a contemporary reworked version, the other half tended to incorporate a more transversal analysis of the relationship between space, works, the public and professionals. Considering the high level of submissions, the Jury decided to recognise the most deserving projects by honoring the artists with a “special mention” and a free annual pass to the Gallerie dell’Accademia di Venezia.

In addition to the winner, ten artists distinguished themselves with their abilities to reinterpret the heritage of the Gallerie dell’Accademia di Venezia: Laura Bisotti, Federica Ferzoco, Cinzia Fiorese, Silvia Infranco, Chiara Pergola, Vera Portatadino, Susanna Pozzoli, Dominique Robin, Gian Maria Tosatti and Nicola Villa. Of particular note, Tosatti may be considered second place for having committed the Jury to intense debate over the choice of winning artist, due to the strength and refinement of his proposal.

The residency period will be defined in further detail over the coming weeks, with a duration of three months between January and May 2019. In addition, the programme of workshops and cultural activities held by Claudio Beorchia will also be scheduled.

The Venice Accademia, in collaboration with the Accademia di Belle Arti di Venezia and the independent non profit organisation We are here Venice, have announced an international competition for the selection of an artist for a 3 month residency in Venice.

To celebrate the 200 year anniversary of the Accademia’s opening to the public, the collaboration with the Accademia di Belle Arti di Venezia is being revived to reinforce the links between the historic collection and contemporary artistic production. The project is supported by the London Stock Exchange Group Foundation – with which the museum has partnered since last June on the “Rivelazioni” project culminating in the restoration of 8 of the gallery’s paintings – that will finance this first “pilot” edition, and the association WahV, that has arranged an apartment on the Grand Canal for the artist for the duration of the
residency. Over a period of three months, the Accademia will welcome a mid-career artist to reflect on the role of the gallery and the relevance of their collections today, taking inspiration from a work, artist or historical artistic theme chosen from the permanent collections. 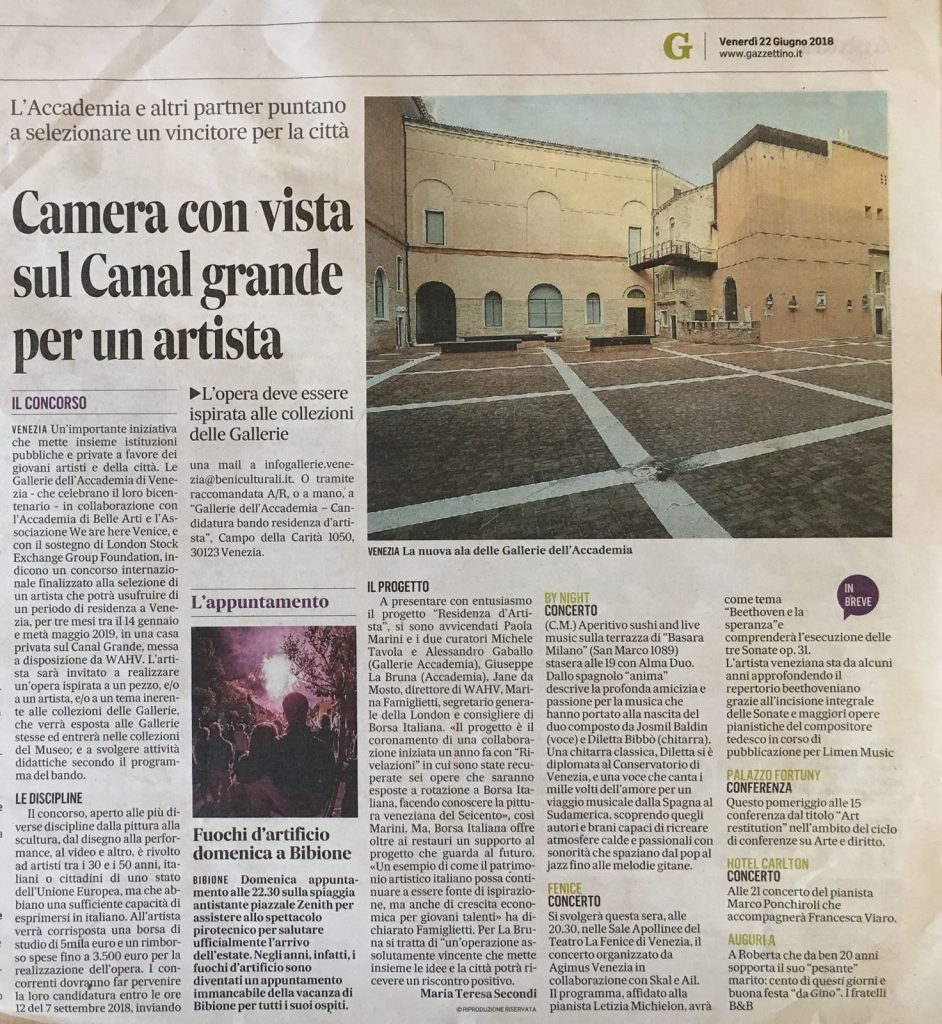 We are here Venice with the Peggy Guggenheim Collection: teaming up for the 2020 ASviS Festival

Jane da Mosto spoke at a conference on Ethics and Digitalisation, held on the island…