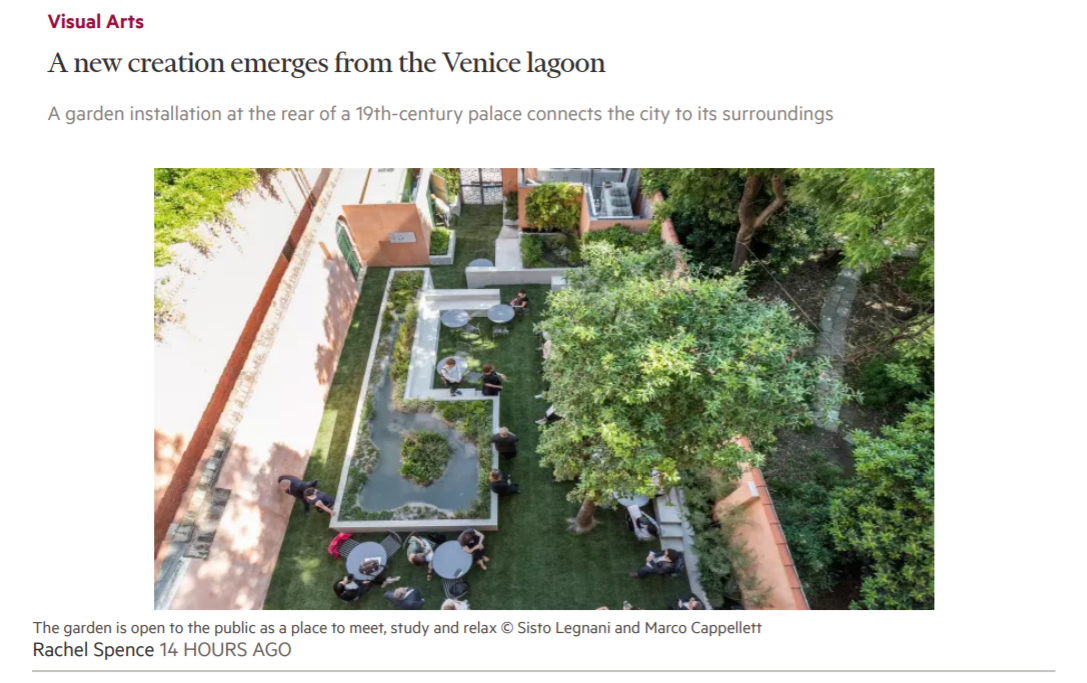 “For you live like seabirds, with your homes dispersed . . . across the surface of the water.”
Writing in 523AD, Ravenna-based statesman Cassiodorus evoked the enviable lifestyles of the
first settlers in the Venetian lagoon — “You may sail up the pleasantest of rivers. Your ships need
fear no angry gusts” — with a poetry that has rarely been surpassed.

It’s unlikely the lyrical Roman would recognise Venice today. The reality of between 20m-30m
tourists a year makes for thronged streets, exorbitant property prices and a shrinking public
infrastructure. As a result, most inhabitants face a daily battle for survival. Many lose. The local
population stands at just 54,000, compared to 175,000 in the postwar era.

Little wonder the last decade has seen vociferous public protests against issues such as the lack
of affordable housing, cruise ships and the sale of public spaces to private enterprise, such as the
beautiful Renaissance edifice that was once the central post office and is now a luxury shopping
mall.

In such an intemperate climate, what role can artists play? As home to two of the world’s most
prestigious Biennales, of art and architecture, Venice is no stranger to imaginative interventions
that take the city as their theme.

All too often, however, practitioners tumble into clichés of, for example, the city as crossroads
between east and west, or fail to realise that carnival masks and Murano glass are not the stuff of
cutting-edge conceptualism. Those who ignore the problems do so at their peril. There were
protests at this year’s architecture Biennale by Venetians who raged against the Victoria and
Albert Museum’s championship of London social housing while they struggle to find homes.

Of far more long-term benefit is Laguna Viva (“Living Lagoon”), which was inaugurated to
coincide with the opening of the Architecture Biennale in May this year. It is a joint project
between British-based collective Assemble and Venetian NGO WahV (We are here Venice), a
non-profit association that researches and campaigns for the long-term social, economic and
environmental welfare of the city. The installation resides in the grounds of the V-A-C
Foundation, a contemporary art space on the Zattere waterfront owned by Russian energy
tycoon Leonid Mikhelson.

At first glance, Laguna Viva seems to be an ordinary garden. Located in the 130 sq m space
behind the 19th-century palace — which was developed by local architect Alessandro Pedron —
it’s a serene refuge where visitors may read a book, sip a drink or simply observe the olive-green
waters of the canal that courses past the iron watergate.

Yet there are curiosities. Why so few flowers? And such an abundance of grasses and shrubs?
What are those feathery trees along the wall? And why are all the plants submerged in concrete
water tanks?

In reality, this is less a garden than an example of a salt marsh — one of the low-lying islands whose
grassy pelts float in the Venetian lagoon. Those wispy trees are tamarisks usually found fringing the
banks of more substantial islands such as Torcello. The shrubs and reeds encompass samphire, sea
lavender and sea aster, known in Italian as settembrini for the violet flowers that blossom in
autumn and turn the waterscape into a queenly carpet.

The embryo of Laguna Viva was planted as V-A-C director Teresa Iarocci Mavica, a Neapolitan
based in Moscow for the past 30 years, cogitated on how best to exploit the empty plot of land
behind the palace. “Venice has been violated by tourism,” declares Mavica as we chat over Skype.
“We decided to give something back: a public space not just for visitors to our shows but for local
people, like the students from the nearby university, to enjoy as a posto di incontro [meetingplace].
Somewhere you can study and relax. A place to pause.”

Mavica turned to Assemble “because they are hybrids: artists who are architects, architects who
are artists”. The deliberately anti-spectacular approach to rethinking public spaces which won
Assemble the Turner Prize in 2015, plus their focus on their long-term relevance to the
surrounding community, is devoid of the “faux-nostalgia” which Mavica wanted to avoid at all
costs.

As a British-based firm, Assemble knew they needed insider expertise. “We wanted someone
who could help us navigate Venice’s social and political issues,” explains collective member Giles
Smith, who worked on Laguna Viva alongside other members of Assemble.

The “obvious person” was Jane da Mosto, a Venice-based environmental scientist, activist and
author who had already collaborated with British architectural firm Muf on Villa Frankenstein, a
Venice-focused installation in the British pavilion at the Biennale of Architecture in 2010. The
South Africa-born, London-raised da Mosto has worked hard to protect the city that has been
her home since 1995. Currently, she heads up We are here Venice, which, as she puts it,
“addresses Venice’s challenges as a living city and advocates evidence-based approaches to
policy-making.” (Muf’s Liza Fior is also on the board.)

“Our attitude is that the health of the lagoon is central to Venice’s identity and intrinsically
linked to the wellbeing of the city,” says da Mosto as we sip a delicious infusion of iced saffron
tea at one of the tables. She recalls the moment when, after Assemble had called on her for help,
she had a brainwave. “At first I couldn’t think what to do with the space. Then I thought: why
don’t we just put back what was originally there? And that was the lagoon.”

Assemble leapt at the proposal because da Mosto’s awareness that the lagoon is “the neglected
lifeline to Venice’s existence, glorious past and future survival” dovetails with their commitment,
in Smith’s words, to “reclaiming territory for the everyday”.

But the logistics of the transplant were challenging. “Everything is different here,” says Da Mosto
when asked about the environmental changes to which the plants must adapt. Care has been
taken to incorporate “critical environmental dynamics and compensate for the smallness of the
system”, she explains. Nevertheless, there’s more shade in the garden. “At first I was worried the
plants wouldn’t cope,” she says, but it turns out that less sunlight has so far been an advantage.
“It means plants’ biological activity is slower in the hot season.”

Smith remembers numerous “practical eccentricities” of pulling off a project in this most
unusual of cities. “The reality of seeing concrete being mixed in the belly of a boat was pretty
startling,” he chuckles.

It’s easy to slot Laguna Viva into the lineage of process art where work is displayed while
undergoing transformation and even decay. “A garden is a work in progress,” observes Da
Mosto. “You can’t always expect to see everything you want. Things will grow, die off and grow
again.”

However, one more permanent element is to come. When the Biennale ends in November,
Assemble plan to cover the surface of the garden — currently fake grass — in the stunning
encaustic ceramic tiles with which they have paved the floor of the Central Pavilion. Made by the
Liverpool-based Granby Workshop, which was founded by Assemble alongside Liverpool
residents who were battling to renovate their derelict neighbourhood, the tiles epitomise
Assemble’s desire to sustain local communities. “We are aware that all too often Venice is
treated as a place for temporary events,” says Smith, too tactful to name the Biennale as one
such transient project. “But we are interested in a more long-term approach.”

Such an attitude is essential if Venice is to overcome its vicissitudes. Yet the here and now of
Laguna Viva is also special. “Venetian gardens are precious places,” says Cristina Gregorin, a
Trieste-born Venetian resident, professional tour guide and the author of The Gardens of
Venice. “Many, however, are closed to the public so this is a welcome change.” Gregorin is not
surprised Venetians are so drawn to the garden. “The lagoon is a magical, otherworldly place.
We like to escape out there because it’s like returning to our roots. But if we’re too busy to make
the trip, it’s lovely to know that a slice of it has come to us.”

Interviewed on the BBC World Service on 13.11.2019 about the dramatic flooding of the city. Water levels…