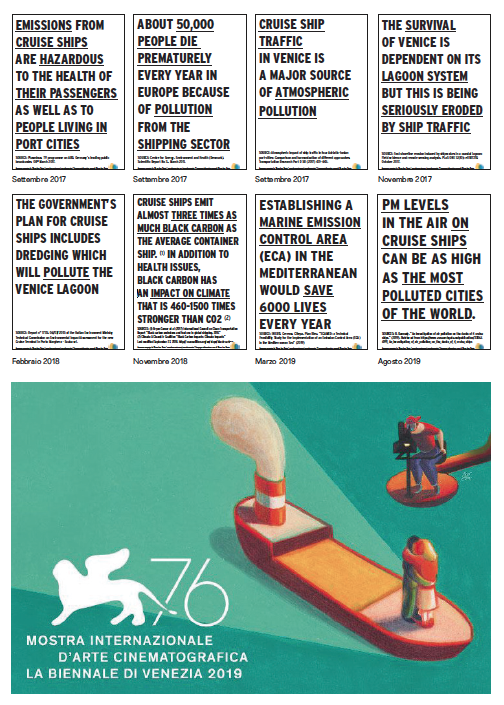 In the run-up to the 56th Venice Film Festival, the Director of the Venice Film Festival Alberto Barbera has joined the movement “Let the Mediterranean Breathe”, coordinated by Cittadini per l’aria ONLUS, to signal the urgency of effective policies to reduce the air pollution, environmental damage and constant risks that cruise ships bring to Venice and wherever they go in the world. We obtained his support as a result of correspondence around the poster illustration of the Film Festival.

The updated Cruise Ranking by NABU reveals that just a very few cruise ships have reduced their pollution loads compared to last year, the overall impact on climate change is worsening.
It is therefore vital that all stakeholders and opinion leaders demand tougher regulations for the cruise sector.
WahV fully supported the Venice Climate Camp, organised by Fridays for Future in collaboration with the Comitato No Grandi Navi, that aims to build awareness of the environmental risks to the planet and the urgency for actions necessary to reverse the critical trends.
Climate March to the Venice Film Festival took place on 7 September at the Lido, on the final day of the Venice Film Festival, since this issue must be a priority of every sector and the culture sector cannot ignore the underlying need for radical change.
Related Posts

How to make your own anti-cruise ship awareness campaign

Interviewed on the BBC World Service on 13.11.2019 about the dramatic flooding of the city. Water levels…

In 2018 WahV began a collaboration with the artist collective Barena Bianca, following their meeting…